We all know that video marketing is crucial to every business these days. Whether you have a product or a service, your client and customer is more likely to watch

We all know that video marketing is crucial to every business these days. Whether you have a product or a service, your client and customer is more likely to watch a video rather than read a long pdf. But tackling the world of video can appear to be a big task. Should I hire a professional spend a lot of dollars and hope to see returns or should I make it myself. If so, where should I begin? How can I use video to tell my brand story more effectively?

All these are valid questions and we have the answers, and more!

At the end of this session, you will

1) be equipped to produce a brand video

2) know how to create your brand’s visual story 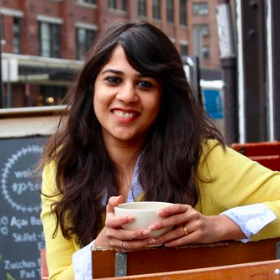 Sania Jhankar is the Co-Founder & Head of Production at an all-female production company, Luminoustudios. Sania Jhankar has been working in the Film & Commercial Industry in New York City for the last 10 years, in the capacity of a Producer & Director. As the head of production at Luminoustudios, she has produced over 150 videos & commercials over the years. You can check out some of the work here: https://luminoustudios.com/videos/

At Luminoustudios, the clientele includes Google Maps, Polaroid, Kodak, Fiverr, Storycorps, Splacer, StartApp, & UCI, amongst others. Sania has developed concepts & produced a variety of content ranging from TV commercials, lifestyle videos, social media ads as well as crowdfunding campaign videos. So far, Luminoustudios has had a 100% success rate with all my crowdfunding videos in that they all have surpassed their goals.

In 2018, Luminoustudios was selected for Maria Sharapova’s Spectacular Seven Entrepreneur Program amongst thous&s of applications from all over the US. As a top finalist across the nation, the team at Luminoustudios works with Sugarpova & NAWBO to build a stronger business.

The same year Sania was selected by Procter & Gamble as one of the top 10 women directors to produce exclusive content for their brand, Gillette Venus. The topic of the video was “a woman’s choice,” and Sania was featured in it. On the same lines, Sania has been active in the female empowerment movement in NYC & a part of groups such as Nawbo, Quilt, Film Fatales & FilmmakeHers.

Sania has several years of experience as a director, writer, producer & editor of features, short-form content & commercials. She is highly experienced in creative development, dramatic filming & working with actors. She has written over 5 original feature film scripts & dozens of short-form content. As a director & creative producer, her films have received national & international recognition & awards at prestigious film festivals. She has a BFA from NYU in Film/TV.

Sorry, the comment form is closed at this time.